Today let’s walk through the process of running COBOL code on AWS Lambda. While it may seem strange, it’s a great way to pull back the curtains and see how Lambda functions work. All the code in this walkthrough is available here on Github.

COBOL stands for ‘Common Business Oriented Language’. It was designed in 1959, inspired by Grace Hopper’s work on FLOW-MATIC and IBM’s COMTRAN. It was created for business use cases and is focused on having an English like syntax.

Even 60 years after its creation, COBOL is still heavily used in banking and government. That’s a huge success for a programming language! In fact during the pandemic several states have been recruiting engineers experienced with COBOL to maintain their legacy unemployment systems dealing with the surge in traffic. While it can be easy to ignore as it’s not considered modern, COBOL remains an incredibly important programming language.

Where this gets interesting is at AWS re:Invent 2018, when AWS released the Lambda Runtime API. This allows developers to bring any language runtime they want to run on AWS Lambda. Curiously, they released day one support for running COBOL Lambda functions.

While running a 60 year old language in Lambda functions feels like the world’s largest antipattern, let’s give it a try. I’m going to cover implementing an AWS API Gateway that invokes a Lambda function on a GET request. The Lambda function then runs COBOL code to return ‘Hello World’ to the user. Let’s see how it goes!

Getting it Running Locally

First, let’s get a ‘Hello World’ COBOL application running on our local machine.

To start, we need to install a COBOL compiler. As COBOL is an enterprise language, most of the compilers come at an ‘enterprise cost’. Far outside of my budget. Luckily there is GnuCOBOL - a free implementation of a COBOL compiler that is up to date with the COBOL 2014 specification. Yes, COBOL was updated in 2014!

GnuCOBOL works by translating the COBOL source code to a C program, where it is then compiled to machine code using gcc.

We can install it on MacOS with Homebrew by running brew install gnu-cobol. For those who don’t want to setup a local toolchain, there is an online IDE for developing COBOL code online.

Now it’s time to write our ‘Hello World’ code. The GnuCOBOL docs have a tutorial that I’ve followed here to create a hello.cob file:

This shows the basics of a COBOL program:

There are also ENVIRONMENT and DATA divisions that aren’t required in this example so we will skip over them.

We can then run a cobc -x hello.cob to compile and the execute the program with ./hello to see the results:

Awesome! So far so good.

Putting it into a Lambda function

To run our COBOL in an AWS Lambda function, we’re going to take advantage of the Custom Lambda Runtimes framework. We’ll use it to create our own COBOL runtime.

We’ll need to use GnuCOBOL to compile hello.cob down to an executable on Amazon Linux 2, AWS Lambda’s execution environment. Then we’ll need to create a bootstrap script that runs the executable when the Lambda function initializes.

The easiest way to compile hello.cob for Amazon Linux 2 is in a Docker image. We’ll create a Dockerfile that runs Amazon Linux 2, installs GnuCOBOL, and compiles the application:

We can then build the Dockerfile with docker build .: 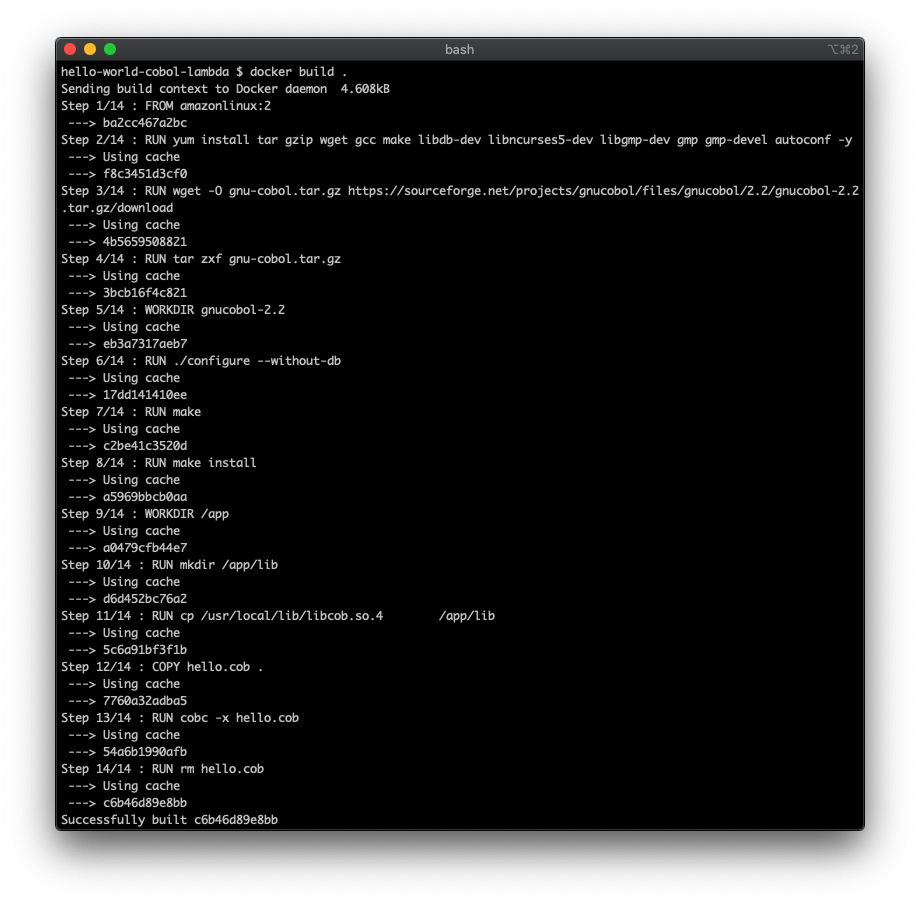 Now that we built our Dockerfile, we need to create a build script. This will copy the executable out of the container to the local filesystem for deploying to AWS:

Awesome! When we run ./build.sh we now have a hello executable that can run in AWS Lambda. We also have a lib folder with the linked libraries required at runtime.

Now that we have an executable that will run on AWS Lambda, we need to create a bootstrap script. AWS requires a bootstrap script to initialize the custom runtime in a Lambda function. It’s responsible for bootstrapping the runtime environment, iterating over invocation events, and sending the response to the Lambda API.

In this case we will make a simple bash script following an example AWS tutorial:

While there are things to improve in this script, like the hardcoded HTTP 200 response code, this works well as a minimal example.

Setting up our Lambda and API Gateway

Now that we have our Lambda runtime and logic, we need to create the Lambda function and API Gateway to run it. We’re going to use the Serverless ⚡ Framework to setup our infrastructure. It’s more lightweight than Cloudformation and I’ve been meaning to give a try.

We can then create our serverless.yaml that defines our Lambda function and API Gateway:

This configuration file defines all our infrastructure. The ./hello executable is our COBOL function, which gets called when you make a GET request to the root of the API Gateway.

So, we have all the pieces in place to actually deploy and run this Lambda 🤞

First we need to run the build.sh script to generate the deploy artifacts: 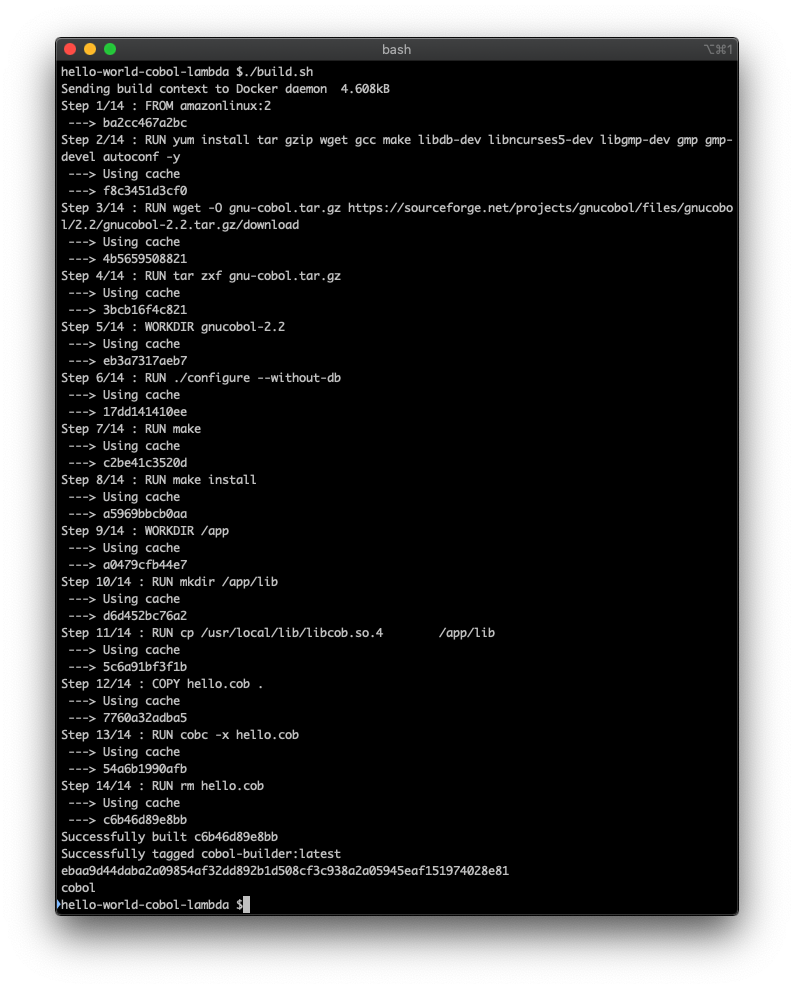 I’ve already configured my local AWS credentials, so I can deploy the Lambda and API Gateway with a simple sls deploy: 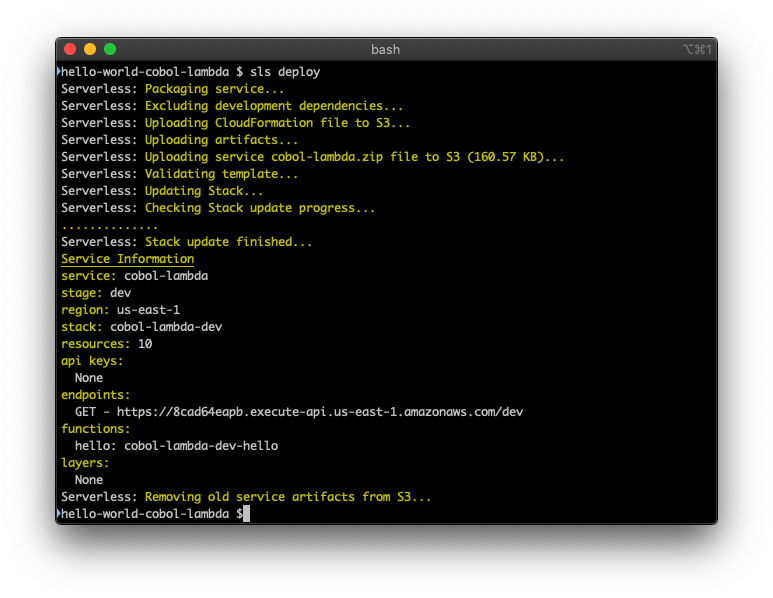 Once it’s deployed, navigate to API Gateway in the AWS Console to grab the autogenerated domain name. Hit the endpoint in a browser and: 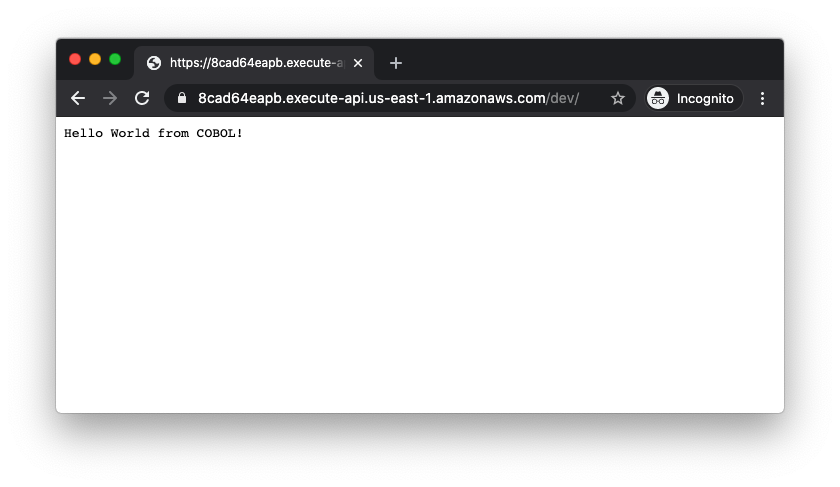 How is this all working? The GET request from the browser hits the API Gateway, which forwards the request to the Lambda function. The bootstrap script runs and calls the ./hello command. The COBOL executable then executes and prints a response. The bootstrap script then takes the response and returns it by sending an HTTP request to the Lambda API. The API Gateway receives the response and finally sends it back to the browser.

Once done testing, running an sls remove will clean up your AWS resources.

This walkthrough shows how little magic there is in serverless computing. AWS Lambda is just an Amazon Linux 2 instance that loops through incoming events, with a great integration into the AWS ecosystem.

Particularly surprising to me was how easy creating a custom runtime is. While it’s missing some use cases, the bootstrap script is only 18 lines of code and gets the job done. The hardest part of this project was compiling the COBOL to an executable for Amazon Linux 2.

So - can you run a 60 year old programming language in a serverless environment? Yes! Should you do this? Definetly not 😁 . But it’s a good way to learn. Happy hacking!